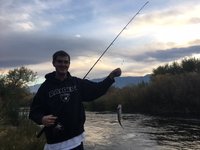 On the morning of October 29th, Austin died peacefully in his sleep.

He attended Crescenta Valley schools including:  Monte Vista Elementary, Rosemont Middle School, and Crescenta Valley High.  He appreciated all his wonderful teachers and thrived in his schoolwork, with history and Korean language classes being his favorites.

He loved animals, especially Roxy his Golden Retriever, who joined him two days after his death. Aus enjoyed following current events/politics, photography and relaxing at Redondo Beach watching the sunset and basking in the solitude.

Austin was a gentle soul, quiet by nature – an observer and excellent listener.  He used the written word as a way to express himself through letters, notes, and text messages throughout his life.  Austin was a huge fan of the Oakland Raiders and often showed his Raider Nation pride sporting jerseys, hoodies, decals, and trips to Oakland with his brother and dad to watch his team.

Austin is survived by his parents, Michael and Teresa, as well as his brother, Matthew.  He is dearly missed by his family including: aunts, uncles, cousins, Godfather, Grandmas, and girlfriend. His dear friends make the circle of loved ones complete.

We are grateful for the 26 years with Austin and wish him peace in the next life.  The Lord and Grandpa Bob are waiting with open arms.