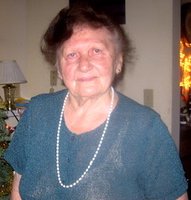 Marie Anna Masova was born on August 14, 1927 in Prague, Czech Republic. She was the manager of a general store for many years until she left her home country in order to find a better life for herself and her daughter in a free world. After a long wait for her documents in West Germany, she found her new home in Los Angeles, California.

It was not easy to find a job in America for someone after 50 with minimal knowledge of English. Fortunately, she knew German well, and through an advertisement in a German newspaper, she found work at a dairy company. Later, she also worked as a newspaper editor for the Czech version of the Daily Herald. She even learned how to drive a car and speak English after the age of 60.

Marie’s closest family best remembers her as a loving Grandmother. She loved to spend quality time with her daughter, Renata, and granddaughter, Pamela. Among Marie’s interests were cooking, sewing, frequenting casinos, watching TV, listening to André Rieu, calling her friends on the phone, and traveling to Laughlin to enjoy boat rides along the river.

Marie loved her independent lifestyle, but this was tragically cut short when she suffered a massive stroke in March 2016. Since then, she struggled with inconsistent healthcare and therapy up until her death on January 16, 2018 at Providence Holy Cross Medical Center in Mission Hills, California.

She was preceded in death by her daughter, Janička, who died in infancy, her son, Tomaš, and her son-in-law, Jaroslav. She leaves behind her eldest son, Jan (and his wife Michaela), and her daughter, Renata. She also leaves behind her granddaughters Marketa and Pamela, grandsons Leo, Robert, and Josef, and great-grandchildren. She is greatly missed.