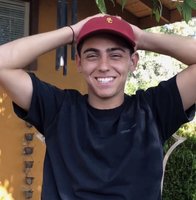 Colin A. Jacobs - July 12, 2000 - July 1, 2020 Colin Andrew Jacobs tragically passed away on July 1, 2020. Colin was born in Glendale in 2000 and grew up in the La Crescenta and Glendale area. He was a student at Mountain Avenue Elementary School and Rosemont Middle School. He attended St. Francis High School in La Canada from 2014 to 2018 and graduated magna cum laude. At St. Francis, he played on the varsity soccer team and was elected team captain. He also led the student cheering section. He was a Link leader and also involved in the Youth in Government Program. He was active in club baseball and soccer, and participated in the USA-Norwegian international soccer tournament in Oslo. In his free time he was a volunteer coach for AYSO soccer and worked at the YMCA tree lot during the holidays. He also was a YMCA counselor for the past four years. He was admitted to the Marshall School of Business at the University of Southern California where he was accepted into the Lambda Chi Alpha fraternity. Colin was ecstatic about being a Trojan and loved celebrating life with his friends and family. He also was devoted to helping others. He enjoyed mixing his own music and deejaying for his friends and relatives. Colin had a radiant smile which reflected his upbeat personality. He is survived by his parents, Philip and Mairena Jacobs, and his sister, Amber. He was a wonderful part of his extended family including 15 first cousins. A staggered visitation will be held on Thursday, July 23, 2020, from noon to 7:00pm at Crippen Mortuary in La Crescenta, CA. Funeral Mass (by invitation only) will be held on Friday, July 24, 2020, at St. Bede’s Church in La Canada, CA.