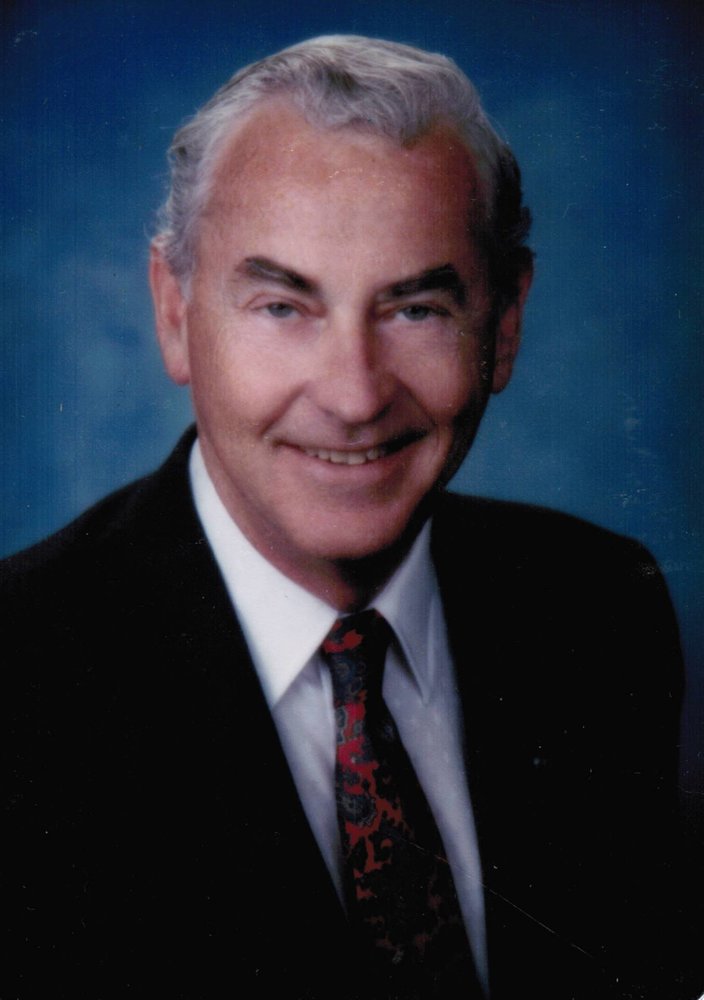 Please share a memory of John to include in a keepsake book for family and friends.
View Tribute Book
John C, (Jack) Quinn was born on November 1, 1930 in Chicago, Illinois to John and Atha Quinn. He was their only child. In 1931 they moved to Los Angeles, and in 1936 they moved to Glendale, California. Jack attended Jefferson Grammar School, Toll Jr. High School. In 1948 he enrolled at the University of Arizona. He was a member of Phi Gamma Delta Fraternity, and served as president in 1952-53. He graduated in 1953 with a B.S. in Business Administration. In 1953 Jack was drafted into the Army, and in 1954-55 he served in South Korea as a member of the Counter Intelligence Corps. When he returned home, he went to work for his father’s construction company. In 1961 he joined Merrill Lynch as a broker in their downtown Los Angeles office. When he returned home from his training in New York, he discovered they had hired a beautiful girl named Doris Nilsson who had just arrived from Sweden. Jack and Doris were married on September 15, 1962. In 1965, when they discovered they were having their first child, they bought their first home in Chevy Chase Canyon in Glendale. They have lived there for over 50 years. In 1979, Jack moved to the Glendale office of Merrill Lynch. That move had a profound influence on Jack, as he was back in his hometown, and became involved in community service. He first joined the Kiwanis Club of Glendale, serving as their President in 1987-88. Then he joined Glendale YMCA Quarterback Club, and served as President in 1986. In the early 80’s, Jack joined the Glendale Chamber of Commerce, and became chairman of their Education Committee. This involvement would influence Jack’s life for many years. Jack served as President of the Chamber in 1991. At the Chamber, Jack came to know the Executive Director of the organization that is now known as The Campbell Center. That evolved into a 25 year relationship, which included serving as President of both the Board and Foundation, Co-Chairing their first Capital Campaign, and bringing them the idea for Derby Day. Derby Day has been their main fundraiser for the past 25 years. Jack also served on the Glendale Community College Foundation for 20 years. He was President in 1997-98, and Chaired the Foundation’s fund raising for the new Science Center and Planetarium. Jack was on the board of the Glendale Community Foundation, and served seven years on the Salvation Army Board. He also served on the Board of Trustees of Glendale Memorial Hospital. There are two organizations that Jack was very proud to have helped start. One is as the co-founder of the Youth Leadership Conference (Character and Ethics), The conference brings together high school students from Glendale, La Canada, and Burbank, with community leaders and people from the business community to discuss leadership and ethics. It is now in its 25th year. The other is The Glendale Youth Alliance, which Jack founded in partnership with the City of Glendale. It provides work and educational help to underprivileged youth. Over 7,000 youth have been helped in the last 20 years. Among the awards that Jack received was The Burtis Taylor Community Education Award from GUSD in 1986. Jack also received The Glendale Chamber of Commerce Man of the Year Award in 1987, also their Patriot of the Year Award in 1998. In 2006, Jack received an honorary degree from Glendale Community College, for his contributions to the College and the Community. Jack retired from Merrill Lynch in 1997. He and Doris went to Africa three times, as it is her passion. He celebrated his 75th birthday by going gorilla tracking in Rwanda. He also went back to Arizona every year that he was able. He enjoyed playing golf and tennis with his friends until macular degeneration made that impossible. Then he could be seen walking in his beloved Chevy Chase Canyon with his Ipod listening to audio books. Jack is survived by his wife Doris, his two daughters, Anne-Marie Hallman and Camilla Quinn; and five grandchildren, Joshua, John, Brianna, Svetlana, and Austin Hallmand. In lieu of flowers, contributions can be made to The Campbell Center 6512 San Fernando Road, Glendale, CA 91201 (818) 242-2434, or The Glendale Youth Alliance 1255 South Central Avenue, Glendale, CA 91204 (818) 937-8052. Services will be at Saint Mark’s Episcopal Memorial Garden in Glendale on Saturday, February 6th at 11:00 a.m.
To send flowers to the family or plant a tree in memory of John Quinn, please visit Tribute Store
Saturday
6
February

Share Your Memory of
John
Upload Your Memory View All Memories
Be the first to upload a memory!
Share A Memory
Send Flowers
Plant a Tree