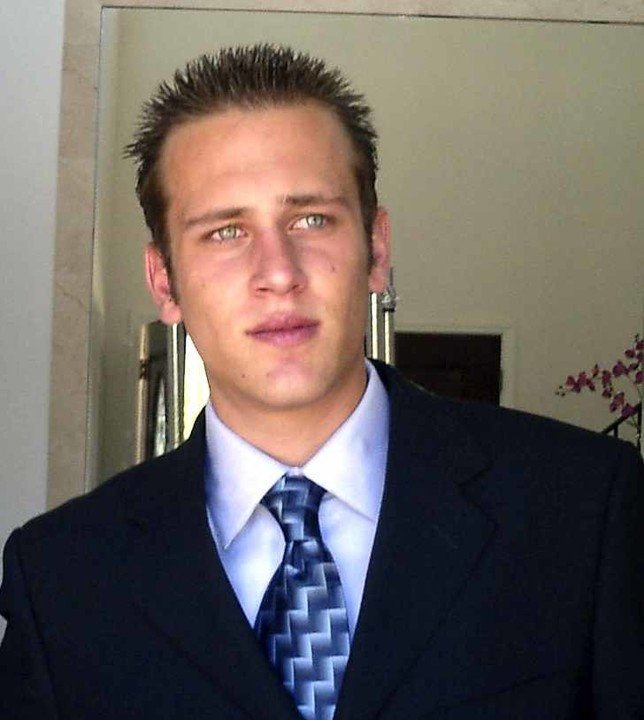 Please share a memory of Ray to include in a keepsake book for family and friends.
View Tribute Book

Raymond Douglas Fisher was born on October 21, 1984 to Kevin and Anne Fisher (Wilson).  He was 6.4 oz beautiful baby boy with bright blue eyes and blonde hair.  He came into the world at 4:47 a.m.  Thirty six hours of labor. Late and dramatic – right from the start.  Ray was called home on Christmas Eve, December 24, 2018 at 4:47 a.m. at Holy Cross Hospital in Santa Monica, California from heart failure.  He had one sister, Shaina Marie Fisher.

Ray lived in Michigan 17 years of his life and Los Angeles, California 17 years.  Ray liked to move around, try out new cities, meet new friends and be around people.  He loved communicating.  Talking all the time.  He started talking early, at 9 mos. He was stringing a few words together.  He talked to everyone, regardless of where he was. He loved movies and books by L. Ron Hubbard.  He played endless hours of video games in his youth and was on many sports leagues.

Ray started his education at Sacred Heart School in Pittsfield, Massachusetts. He went on to Lincoln Elementary and Drager Middle Schools both in Adrian, Michigan.  He attended Rosemont Middle School and graduated with high honors from La Crescenta High School, both in La Crescenta, California.  He went on to attend Pasadena City College in the areas of business and sociology.

Ray was a member the Adrian YMCA most of his junior years playing soccer and little league ball.  He played ice hockey in Toledo, Ohio, being given the name “Razor Ray” and going on with his team to win the championship game and skate defense at the Joe Lewis arena in Detroit, Michigan.  He played football in high school for the Crescenta Valley Falcons.   Ray was such a great pitcher in baseball as a child that he was written up in the news for several “no hitter” games reaching far into the 6th inning.  We teased him of his athletic and natural physical abilities.  He was clearly a star!  His favorite number was 32.

Ray loved to dance to the 90’s music, songs of Snoop Dog and Red Hot Chili Peppers.  He loved the LA Dodgers, LA Lakers and Detroit Red Wings.  Ray’s favorite restaurants were Yu Jean Kangs in Pasadena, Banderas in Los Angeles and Panda Orange Chicken.  Ray loved eating at various ethnic restaurants that he would find along his way.  He loved to order for the table and surprise everyone with his picks.  He was a gentleman who loved to take care of everyone else first.  Ray loved life!  He had traveled to many states in his life and lived in a total of 4 states over the course of his life.  Adrian, Michigan; New Lebanon, New York, Pittsfield, Massachusetts and in and around Los Angeles, California.  His favorite city was Venice, California.

Ray settled on a life of agriculture as his career. He helped his father on the family farm growing corn, soybeans and wheat in Michigan but his love was in growing cannabis.  He also helped out his mother with her business at times taking photographs and helping her load and unload the furniture.  He even chose to perform foot massage at a children’s day care party when a staffer failed to show– Ray was a team player, all the way.

Ray was a great son to his mother.  Ray stuck by her when she moved to California, just he and his sister.  Ray was first to get a job and help provide financially for his family.  He had a paper route and went on to other side jobs to help support his mother and his sister during tough times.  Ray loaned his mother money to help start Spa-Go’s and helped his sister learn how to be a world class cannabis grower.  Nothing was too good for his mother and sister.  Ray was a family man.  Ray would walk in a room liked he owned the place.  He would, on his way out, know the dishwasher, the owner and the staff before he would leave.  He was just that type of guy.

Ray was a great son to his father. From the moment he was placed into his father’s arms immediately after being born they shared a bond that was never broken.  Spending countless hours over the years playing catch, hitting and chasing fly balls, wrestling and go carting.  Never complaining about power washing equipment or grabbing a wrench to help when you needed an extra hand.  Ray was always willing to help out anyone.  Ray loved his father very much and always considered him a great friend.

Ray was a great brother to his sister Shaina. Twin. Wherever he went, she went  Wherever she went, he went.  They were inseparable and best friends for life.  They knew each other better than anyone else and Ray will be forever missed in her life.

Addiction and prescription to Oxy at age 17 contributed to the cause of Ray’s early death of heart failure.  We, as his family, wish to use this time to remind everyone to be kind to those with afflictions and always share Ray’s story.  A life that ended way too soon but a life that brought love, meaning and joy to all that knew him.  We ask that in lieu of flowers or gifts of money, we ask you to donate in Raymond’s name to your local human society or a charity or a group that helps the homeless.

To send flowers to the family or plant a tree in memory of Ray Fisher, please visit Tribute Store
Saturday
12
January