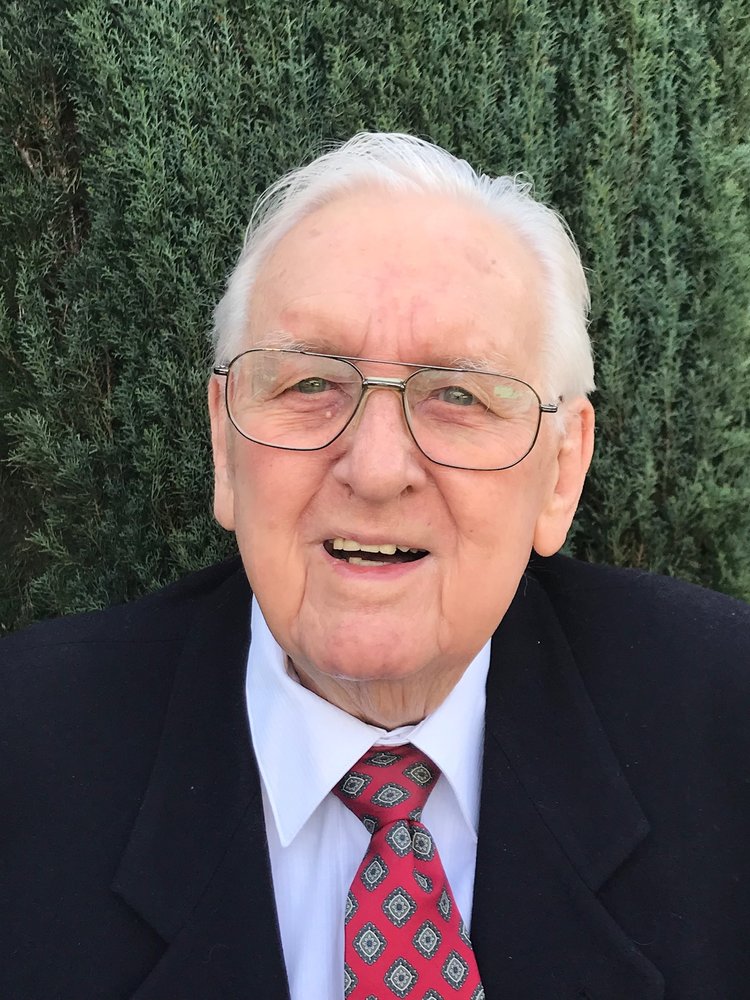 Please share a memory of Bud to include in a keepsake book for family and friends.
View Tribute Book
June 13, 1926 to January 7, 2020 Henry Joseph Bogust (lovingly nicknamed and known to all as “Bud”) was born June 13, 1926 to Joseph and Victoria Bogust in Patchogue, Long Island, New York. He had two sisters, Francis who was 9 years older and Ellie, his twin. He was a patriot, a gentleman, an adventurous spirit, a romantic, and a jack-of-all trades. Like many families, his was hard hit by the Great Depression. As a child, his father’s flourishing stock and feed business was wiped out by the stock market crash. He grew up a product of the times and was forever imbued with that era’s work ethic, resourcefulness, and compassion for the plight of others. When Bud was 10 years old, his father moved the family from Long Island to Detroit to secure a job as an Engineer. There Bud was admitted to the Ford trade school as an aspiring engineer, focusing heavily on math and science. In his senior year of high school, his father accepted a job in Los Angeles and moved the family to the west coast, where Bud enrolled at Hollywood High. He had little time for extracurriculars, focusing instead on his academics and working both a morning and night job as a short-order cook and railroad man. He graduated from Hollywood High in the spring of 1944. With World War II underway, he enlisted in the Army Air Corp in December 1944. He trained as a B-29 gunner and later transitioned to aerial photography that took him on aerial missions throughout Europe and North Africa. His service earned him an honorable discharge in December 1946. Bud’s life is a story of love. After his military service, Bud returned to school under the GI Bill and attended L.A. State (now Cal State Los Angeles). It was there in the fall of 1951 that Bud met Mary Bechely, the love of his life. The two were married a year later in November 1952. He graduated from Loyola Law in June 1955 and passed the California Bar and was admitted to practice law in December 1955. Immediately after passing the bar, he accepted a full-time position at the law firm, Chase Rotchford. He practiced law for over 40 years specializing in civil defense litigation in aviation, railroads, public utilities, and medical malpractice. In 4 years, he was promoted to senior partner. He served on countless boards and was honored for his commitment to his profession. He served on the Loyola Law School Board of Governors and was one of the earliest members of the prestigious American Board of Trial Advocates (ABOTA), serving as its first National President in 1970. He was admitted to practice in the Supreme Court of the United Sates, the U.S. Court of Appeals 9th Circuit, was a member of the California College of Medicine, Medical Legal Institute of Pharmacology, the American College of Trial Lawyers and was elevated to Emeritus Diplomate, ABOTA’s highest honor. Bud attributed his professional success to his wife’s love and support, and the family of partners and colleagues they had built at the firm. Together, he and Mary raised 14 children. Throughout their 67-year marriage, 60 years in La Crescenta, they travelled the world together, visiting nearly all 50 states and more than 70 countries. Bud coached countless sports teams and was a founding member of the Glendale Little League. He was a lifelong learner with an unparalleled memory, a fast and voracious reader, often finishing a book a day. He loved deep sea fishing with the kids, Dodger Baseball, traveling, cooking Sunday breakfast, attending Mass with the family, and taking care of the family pets. He is survived by his wife, Mary, children: Chris, Torrey, Greg, Bridget, Katey, Matt, Judd, Colby, Britt, Jason, and Bart and their respective spouses, and grandchildren: Samantha, Pamela, Nick, Jack, Matt, Lauren, Makayla, Morgan, Van, Maddie, Josh, Cronin, Keaton and Reeves. He will be joining his predeceased sons Brad, Josh, and Jeff in heaven. His family and many friends will miss his vivid stories from his rich life experiences, his quick wit and intelligence, and his kindness and generosity. Services will be held at 9:30 AM, Monday, January 27, 2020 at St. James the Less Church, 4651 Dunsmore Ave., Glendale, CA 91214. In lieu of flowers, donations may be made to American Legion Post 288 (PO Box 223, Montrose, CA 91021)
To send flowers to the family or plant a tree in memory of Bud Bogust, please visit Tribute Store
Saturday
25
January