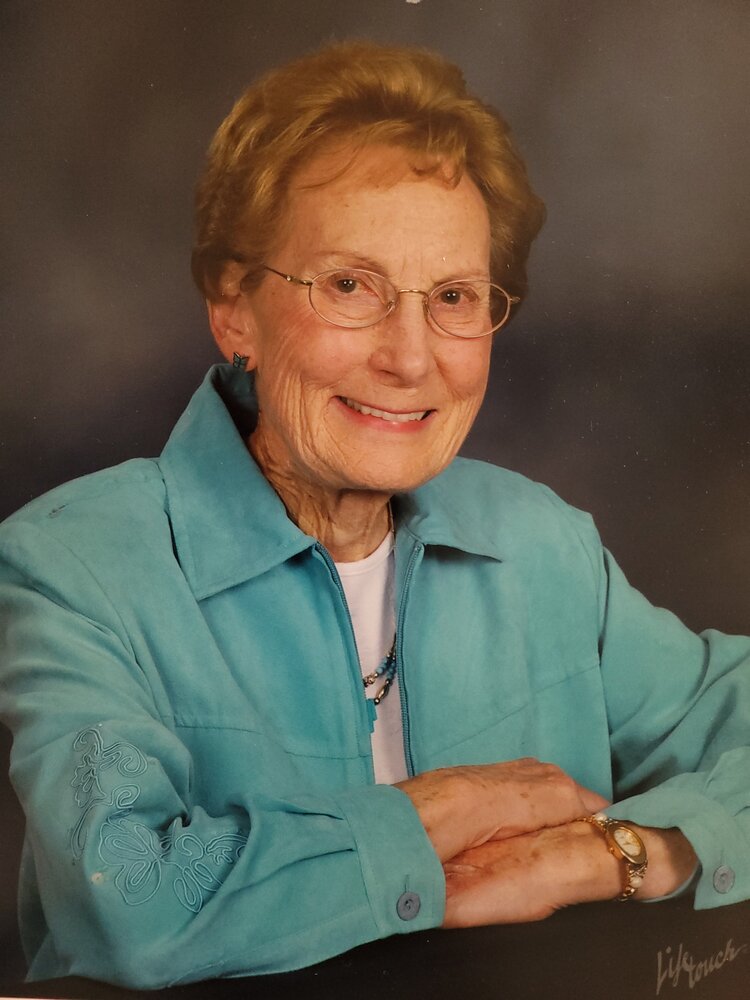 Please share a memory of Frances to include in a keepsake book for family and friends.
View Tribute Book
Frances "Fran" Roselle Moore was the first child born to Agnes Haberland Johnson Morre and Martin Moore on December 13, 1927 in Laramie Wyoming. Fran grew up in Laramie with 3 sisters and two brothers. After graduating from Laramie High School in May 1945, Fran moved to the Los Angeles area in California where she lived with her older sister Marjorie, brother-in-law Bernie, and niece Sharon Plumb. Fran began working for Bank of America on June 1, 1945. Fran loved to ice skate and soon began to skate and perform in shows in Pasadena, CA. Fran met and dated her future husband while skating, as well as forming many lifelong friendships with several skating couples. Fran married Arthur "Jim" James Cook, a native Californian on May 15, 1954. Fran worked at the bank for 10 1/2 years until she resigned to give birth to her first son Mark Stuart in March 1956. Fran's other two sons, Roger Edward and Warren James followed in 1959 and 1963. Fran and Jim bought their first and only brand new home in Sunland, CA in 1955. Fran was always very involved with her children's school PTA's and was a member of the executive board in 1971-1972. In 1968 Fran started working part time as a caterer helping with wedding receptions and birthday parties. In the mid 1970's, Fran was offered an opportunity to assist in cooking classes at Lawry's California Center in north Los Angeles. Fran later worked in the test kitchen at Lawry's assisting in food photography for ten years. Fran remained close friends with many wonderful colleagues from Lawry's right up until her death. After working as a part time food stylist, Fran retired in 1996. During Fran's retirement, she enjoyed many travel adventures with her husband Jim. Fran loved being a grandmother to her son Roger's two children Christopher James and Chelsea Suzanne and taking care of them often. Fran loved being with and visiting her many many relatives, especially during holidays and family reunions. Fran loved collecting thimbles, tea cups, and anything rooster, chicken, and butterfly related. Fran loved spending time in her garden, sewing and quilting. Fran was very involved with many activities at her church, Our Lady of Lourdes in Tujunga, CA where she was a parishioner for over 60 years. Fran was involved with the senior quilting group at the senior center in Sunland, the senior quilting club at the Sunland/Tujunga YMCA, and Project Linus. Fran was predeceased by her son Warren (1979), husband of 54 years Jim (2008), mother and father Agnes and Martin Moore, her sister Laura Johnson Adamson, her sister Marjorie Johnson Plumb, brother Bruce Johnson, twin brother and sister Eugene Moore and Genevieve Moore Surline, many brother and sister-in-law's, aunts, uncles, nieces and nephews. Fran is survived by her sons Mark and Roger, daughter-in-law Judy Meerkreebs Cook, grandchildren Chris and Chelsea sister-in-law Shirley Vance Moore Hoyt, and many many nieces and nephews. Fran passed away peacefully in Pasadena, CA on March 8, 2022 with family at her side.
To plant a beautiful memorial tree in memory of Frances Cook , please visit our Tree Store

Look inside to read what others have shared
Family and friends are coming together online to create a special keepsake. Every memory left on the online obituary will be automatically included in this book.
View Tribute Book
Services for Frances Cook
There are no events scheduled. You can still show your support by planting a tree in memory of Frances Cook .
Plant a tree in memory of Frances
Share A Memory
Plant a Tree